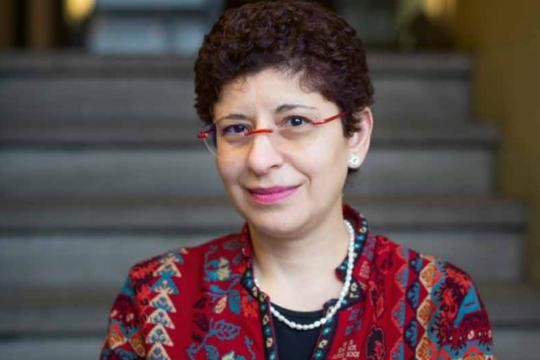 “Our world needs plenty of healing”

An interview with Dr. Azza Karam

Dr. Azza Karam serves as the senior advisor on social and cultural development at the United Nations Population Fund (UNFPA). She is the first woman Secretary-General of Religions for Peace International and the lead facilitator for the United Nations Strategic Learning Exchanges on Religion-Development-Diplomacy since 2010. She coordinates engagement with the UN’s Global Interfaith Networks of 600 faith-based organizations.

You have been elected as new secretary general of the World Conference of Religions for Peace. How important is it that you are the first woman, and the first Muslim to take that role?

If we think in terms of women’s leadership of the largest, oldest, and most representative multi-faith organisation in the world, then how can this not be significant? Few people in the human rights’ world would acknowledge that religion is a feature of women’s empowerment, after all. In fact one of the many stereotypes around religion is that it is somehow limiting and oppressive and subordinating of women, and that religious leaders in particular serve as the tools of that oppression and subordination across our histories.

This is a stereotype based on ignorance about the role of faith in women’s lives. So here you find a group of religious leaders from around the world, leaders of the oldest and most well-established religious institutions, electing a woman to lead their interfaith efforts for peace. Can we possibly shatter stereotypes any harder than this?

As for being a Muslim in that role… that too is challenging to comprehend. Many Muslims today are besieged by stereotyped roles in the West, and by a sea of violence and confusion within and amongst their own Muslim majority-countries and co-religionists. How often do we hear of Islamophobia? How often do we hear of ‘Muslim terrorism’? I believe it is way too often. In fact, these phenomena are treated as if they were amongst the top ten newsworthy items ever.

So in this context, we have a Muslim woman taking the helm of an organisation dedicated to building peace between and within and with all religions. I consider these two ‘coincidences’ to be quite historic. And frankly, the responsibilities inherent in these two realities are too heavy to weigh…

What do you intend to do in the role?

At the risk of sounding like a contender at the Ms Universe pageant, I really, truly and wholeheartedly believe that faith heals all wounds. And our world needs plenty of healing. Too many spirits are wounded; too many are broken. And our earth itself is deeply wounded. So I want to serve the healers – the faith leaders – to continue to build a movement of all faiths, all dedicated towards healing ourselves, our earth and, by the grace of the Almighty, our spirits. I believe that when the qualities of mercy, compassion and love – inherent to all faiths – come together across all differences, and come together in celebration of our diversity of faiths, healing is inevitable.

Practically speaking, Religions for Peace (RfP) has an unparalleled legacy of convening faith leaders in the service of the common good. It has been doing this for half a century already. This legacy is needed today more than ever, especially given how ‘normal’ it is to find nations and communities investing in and using divisive rhetoric and policies, apparently guided by a philosophy akin to the ‘survival of the fittest’. Human rights, including civil, political and cultural rights and all incumbent freedoms, have, at best, never been more misunderstood, and, at worst, never more attacked and vilified.

I believe faith leaders today have a moral obligation to stand in solidarity with one another, and to protect and defend freedom for all of creation – including the earth’s well-being.

RfP’s Inter Religious Councils (IRCs) are uniquely positioned to ensure that ‘no one is left behind’.  We need to invest in strengthening our 100+ inter-religious platforms. We need to support these platforms to become beacons of compassion, mercy and love in times of conflict as well as in times of peace. RfP’s already existing councils can provide support to civil society, governments and intergovernmental entities alike, to achieve each and all of the sustainable development goals.

You founded the Global Women of Faith Network with funding from the Ford Foundation. What work does this network do, and why is it important?

The Global Women of Faith Network is the only global network of women believers from each and every faith tradition – including Indigenous Peoples – who come together regularly at the local, national, regional and global levels, to strengthen their faith traditions through inter religious engagement. This enhances their age-old abilities to serve their communities’ myriad needs, both spiritual and practical. Women of faith convened into, or members of the Network work in all spheres – political, social, and economic. Many are affiliated to their religious institutions. Some are ordained and work within them. Many others are not ordained, but are dedicated to serving their communities’ needs through working voluntarily on projects and programmes in health, education, nutrition, sanitation, environmental protection, micro finance and economic empowerment, political representation, mediation in conflict/peace making and peace building, and in science and technology.

It is a network of women from around the world, whose work is inspired by their faith and who are affiliated in some way, shape or form to/with their religious communities. It is a remarkable group of women whose leadership is based entirely on their inspiration by the faith and their service to their communities in its name. Although more and more governmental entities are beginning to appreciate the role of women of faith today, RfP has been investing in supporting this Network since 2000.

You’ve written and/or edited a number of books. What are the key themes of these?

I began by writing on the nexus of religion, politics and human rights, with a focus on women’s rights. Over time, as my career has evolved, I have written about democracy and political Islam, women in politics, youth and education, conflict and peace building. Over the last decade, I have focused on the complex interplay of religions with development and diplomacy, the latter seen through the lens of multilateralism/multi governmental entities.

How does engagement with religion so often end up putting older, conservative males in positions of power? How can this be changed?

This question needs to be adjusted: religious institutions are traditional bastions of older, conservative males. The history we know today, is one where each and every faith leader – whether Prophet, Messenger, or an embodiment of godly qualities, has been a man. And so their institutions are full of men at the forefront. Yet we know that no religious institution would survive without the women serving and sustaining its service. Men are indeed the majority of spokespersons and decision-makers within most religious institutions, but women are leaders of the services which these institutions have provided since their inception. When I worked in RfP in 2000-2004, my own research showed that over 90% of those providing services in their faith communities were women.

Engagement with religion does not put older, conservative males in positions of power. Far from it. Working with the religious institutions, religious leaders, and faith-based NGOs, over time, has opened and enabled the opportunities for cross-fertilisation of ideas and opinions, and informed activism. Think of Liberation Theology in Latin America and the Civil Rights movements in the US which were ultimately inclusive and transformative spaces of activism for fundamental freedoms. These were spaces and places where women played a fundamental role.

This part one of a two-part interview. The second part can be read here.