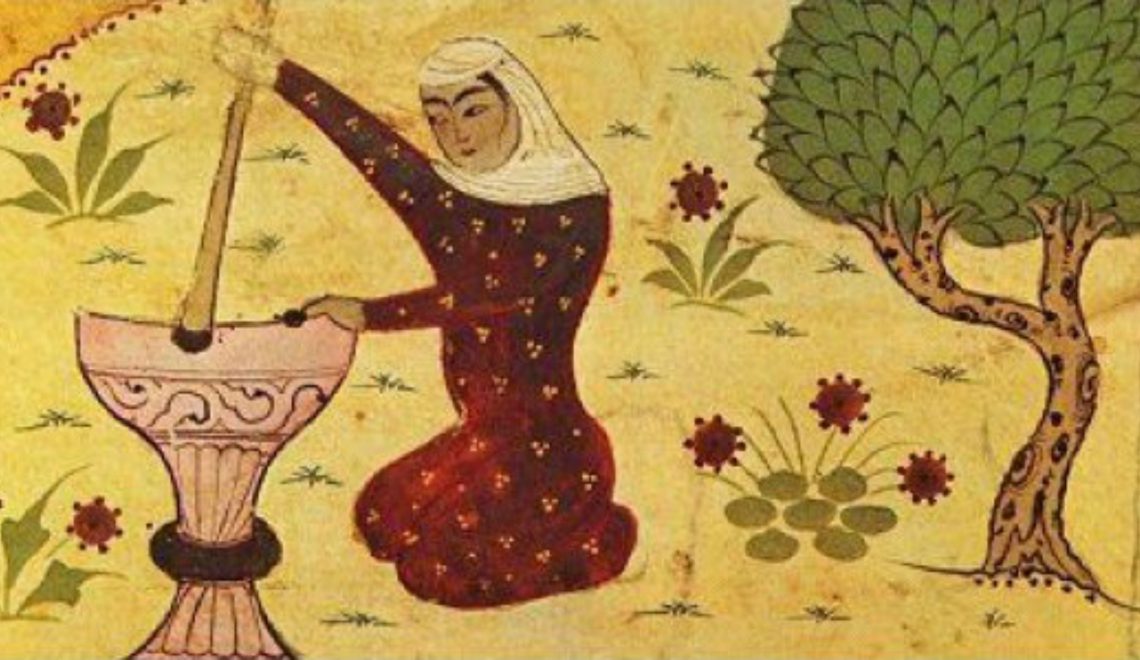 Rabiʿa al-ʿAdawiyya was a Muslim saint and mystic also known as Hazrat Bibi Rabia Basri or, more simply, Rabia Basri. Rābiʿa is one of the most significant female figures in the development of Islam, best-known for her devotion to God, her ascetic lifestyle and her aphorisms; a pithy, compact mode of communication used to impart religious wisdom.

Rabiʿa’s story does not appear in most medieval histories or biographical works in the Islamic world. It has been passed down through many different versions, particularly within the Sufi tradition. The earliest hagiography was written 400 years after her death, making it impossible to disentangle myth and tradition from reality. According to her most recent biographer, Rkia Elaroui Cornell, all that can be definitively stated about her is that she  was ‘an ascetic from Basra; she was most likely celibate; she was known for her eloquence; she was a teacher of religiously inspired ethics; and she talked about the love of God in at least some of her teachings.’

Rabiʿa first appears in the writings of the Persian Sufi theologian, Fariduddin Attar who situates her philosophy and teachings within a Sufi framework. This positions her as one of the most significant precursors of the ascetic, and spiritual practices of Sufism, and as a foremother of a long line of female mystics in the Sufi tradition. It is believed that she was born to a poor family in Basra, Iraq. Her name means ‘fourth’ so she may have been the fourth daughter of the family. According to one version of her mythos, after the death of her father she was forced into slavery, but her master was so impressed by her piety he released her so that she could follow her devotional path. She is credited as a pioneer of love mysticism, eschewing the fear of God or the promises of rewards for an absolute, impassioned devotion to the divine.

Rabiʿa’s life was known for its austerity. A visitor described her as ‘an old woman of eighty years of age. She looked like a shrunken, old water-skin and appeared to be on the verge of collapsing. In her house, I saw a worn rectangular mat and a clothes rack made of Persian reeds, extending about two spans up from the floor. The door to the house was covered by a skin, perhaps made from mullet. There were also a jar, a mug, and a piece of felt that served as her bed and prayer rug. On the clothes rack made of reeds, she had hung her burial shrouds.’

In tune with her asceticism, she was believed to have embraced celibacy, despite the strong expectation of marriage in Islam. She justified this on the basis that her devotion to God came first: ‘One obligation to God prevents me from fulfilling another of his obligations.’ In one account she refuses a suitor by saying that she belongs to God, and thus could not accept marriage: ‘I am not my own… I am under His command. Permission for a betrothal can come only from Him.’

As neither daughter nor wife of an influential man, Rabiʿa’s status in Muslim history comes solely from her own accomplishments. Muslim feminist Leila Ahmed notes Rabiʿa’s ‘full control and legal autonomy with respect to herself in that she is neither wife, nor slave, nor under any male authority’. Many vignettes of her life show her reversing the established gender order, by providing religious instructions to men. However, as Cornell notes, Rabiʿa’s early biographers position her as an exception to the female sex: a rarity with ‘the maturity, knowledge and judgment of a man’.  Rabiʿa is believed to have taught both men and women her religious philosophy, and may have had female acolytes.

Rabiʿa’s legacy is not only reflected in Muslim religious history, but also within Muslim culture: besides literary retellings of her life from a variety of perspectives, Rabiʿa has frequently been depicted in popular literature such as radio dramas and films, the most influential being an Egyptian film directed by Mostafa Niazi, and featuring songs by Umm Kulthum. She is likely to be buried in Basra, but other tombs attributed her can be found in Jerusalem, Damascus and Cairo, an indication of her importance within the Muslim world.