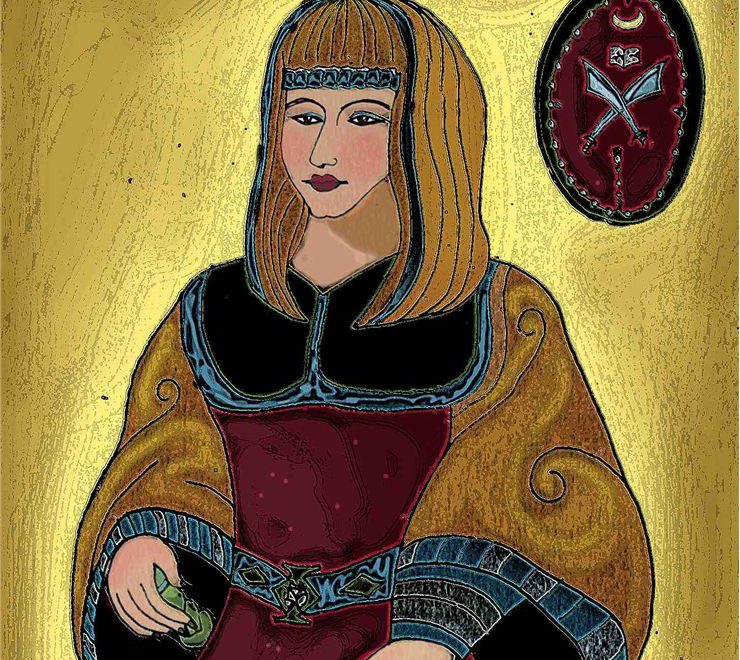 Lalla Aicha (or Fatima) bint Ali ibn Rashid al-Alami, best known as Sayyida al Hurra, was the governor of Tétouan in Morocco. She is the only woman in the history of that country to have ruled directly in her own name, governing the city-state for a period that lasted over 14 years. She commanded a flotilla of pirate ships, forging a partnership with the legendary pirate ‘Barbarossa’. Arab sources describe her as a ‘woman of iron.’

The title by which she is best known – Sayyida al Hurra – describes her as a free noblewoman. Her father, who came from a noble family, was Moulay Ali ibn Rashid. Her mother was Andalusian, born as Catherina Fernandez, had married to her father during a military campaign at Granada. She had converted to Islam, taking on the new name Lalla Zahra Fernandez.

Sayidda’s birth occurred during an intense period of conflict between the three great empires of the time: the Spanish, Portuguese and Ottoman empires, which would shape the entire Mediterranean region. After Granada fell, in the final act of the Reconquista, nearly eight centuries of Muslim rule in the Iberian Peninsula came to an end. Sayyida’s family fled Spain for Morocco. They hid in the mountains for a period, before her father founded the town of Chefchaouen in northwest Morocco. Chefchouen accepted a flood of refugees from Andalusia. Sayyida grew up surrounded by luxury in the palace of Chefchaouen. Due to the comparatively egalitarian values within Andalusian society, she received a similar education to that of her brothers, studying under the Sufi theologian Mohamed Ben Abdallah El Ghazouani. She spoke three languages – Arabic, her mother’s Castilian Spanish, and was also fluent in Portuguese.

She was married off at a young age to a much older man, Abu Hassan al Mandri, an ally of her father. When al Mandri died in 1520, Sayyida then became the governor of Tétouan, marking her official entry into the world of politics. Her territory was vulnerable due to the political complexities of the era, in which she juggled not just the influence of three competing Empires, but also the interests of two competing Moroccan dynasties: the Saads to the South, and the Watassis to the North, within in a landscape of minor city-states and emirates and constant Portuguese incursions.

Due to the coastal areas surrounding Tétouan, the task of defending the people and material resources of the city demanded a maritime response. It is through the response she developed to this problem that Sayyida gained her reputation as a pirate queen – probably becoming the only woman of noble birth to be considered a pirate leader. Her domain included the north of Morocco and the Mediterranean, reaching as far as Gibraltar, with a flotilla based at the port of Martil which fought battles along the coastline. She built both her army and her arsenal for the purpose of defending her territory, rather than for the sake of plunder; nevertheless, Tétouan prospered under her leadership. The region increased in wealth as Sayyida’s crews raided ships sailing close to Moroccan ports, coming close to overshadowing the capital at Fez

Over this period, Sayyida commanded the Western half of the Mediterranean, and the renowned Ottoman admiral Hayreddin ‘Redbeard’ Barbarossa controlled the East. They settled a pact between themselves, uniting to cause huge damage to the Portuguese and Iberian flotillas. No less valuable as a diplomat than a pirate leader, she also negotiated with Christian leaders.

In 1541, the Sultan of Morocco Ahmad al Watassi asked for her hand in marriage. Sayyida accepted with the condition that the wedding did not take place at Fez, but at Tétouan. The sultan accepted her demand, despite the difficulty of the journey for himself and his retainers, marking the only time in Morocco’s history that a royal marriage has taken place outside the capital. After marriage, the couple continued to live separately; nevertheless, political links between the two families were established.

This ultimately led to a schism within her own family, particularly after the death of her brother, who had also married into the Watassi clan. The Watassis, caught between the Saad family and the Portuguese incursion, sought to ally themselves with Portugal, a move supported by Sayyida’s brother. Many in Sayyida’s family were hostile to this move, including Sayyida herself; some allied with the Saad family in response.

These tensions led to a plot to depose Sayyida. The loyalty of her pirate crews proved to be weak. In 1542, Sayyida was replaced by her son-in-law Moulay Ahmed al-Hassan al-Madary. She retired to the house in Chafcouhouen where she had been born, and lived quietly for another twenty years.