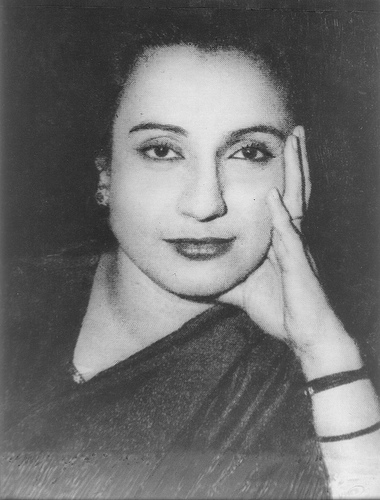 It was imperative that the peoples of the world should recognize the existence of a code of civilized behaviour which would apply not only in international relations, but also in domestic affairs. – Shaista Ikramullah

Begum Shaista Suhrawardy Ikramullah was a politician, diplomat and author who served as Pakistan’s ambassador to Morocco from 1964-67. She was a delegate to the United Nations and worked on the drafting of the Universal Declaration of Human Rights. António Guterres said she ‘championed Article 16 on equal rights in marriage, to combat child marriage and forced marriage.’

She was born into an intellectual family in Calcutta, which was then the largest city of colonial India. Her paternal grandfather was a Sufi scholar, who was principal of Dhaka Madrassa, the first English-style grammar school in the city; her aunt earned a degree from Calcutta University as a historian of Urdu literature. Her father Hassan Suhrawardy studied medicine in Calcutta and England, as well as working for the East India Railway. However, her mother came from a far more traditional background, being descended from Mughal landowners, and raised in purdah.

Shaista described her education as following a ‘dual pattern’. She was taught by British governesses and attended nursery schools with the children of British colonists. At home, she was instructed in Urdu and Farsi literature, and the Quran. In 1927, her father decided to send her to an English convent school, despite her mother’s concerns about breaking purdah and the potential of converting to Christianity. Shaista herself withdrew from the school during her father’s absence to assuage the mother’s concerns.

However, during this time her brother died of tuberculosis, plunging the family into disarray. With no male heir, any objections to Shaista’s further education dematerialised. Shaista accepted a marriage which had been arranged for her five years previously with Mohammed Ikramullah, a civil servant with connections to the court of Bhopal. The service was conducted a few days after she had completed her BA degree. As a civil servant, Mohammed was expected to mingle at social events, and Shaista was released from purdah to accompany him to Delhi. However, she found the transition from sequestration to socialising with the other wives awkward and tedious.

After three years, and the birth of their first son, the family were transferred to London, where they lived in a flat in Chelsea. Shaista took the opportunity to soak in the lively cultural life and studied journalism and literature at the University of London, where she took her PhD. Her thesis on the development of Urdu fiction was published as a book.

On her return from London, Shaista encountered a much-changed Delhi; the rift between India’s Muslims and Hindus had deepened. Shaista involved herself in the work of the Muslim League, which was led by Jinnah and his sister Fatima. Fatima Jinnah recruited Shaista in the formation of the Muslim Women’s Student Federation, which began meeting in 1942. From its first meeting, the organisation pledged its support to Pakistan, in fear of being either assimilated or subordinated in India. Shaista became involved in organising women in the Muslim League Women’s Sub-Committee, staging the annual general meeting in Delhi in 1943.

During the chaos preceding Partition, Lady Brabourne’s College for Girls – where Shaista volunteered – was designated a refugee centre, where she struggled to find food and clothing for those fleeing communal violence, and dealt with outbreaks of cholera and smallpox. In the midst of this turmoil, Shaista’s father died. Concerned with family matters – including the sickness of her daughter and her own pregnancy, Shaista was distracted from politics during both the withdrawal of the British and the creation of Pakistan. Moving to Karachi in 1947, she was one of only two women to be elected to the Constituent Assembly, tasked with writing a constitution for the new nation. In this role she worked for the representation of her Bengali constituents, the rights of religious minorities, and promoting women’s causes. Her most important achievement was passing the personal laws of 1951 which guaranteed women full inheritance rights, against fierce opposition from traditionalists. Shaista’s many other progressive suggestions were obstructed within this male-dominated political system, and in 1954, the Constituent Assembly was dissolved.

An ardent member of civil society, Shaista was also a member of UNICEF, the Red Cross, PEN, and the All-Pakistan Women’s Association. She was also appointed to Pakistan’s delegation to the United Nations in 1948, where she met Eleanor Roosevelt. As well as serving on the Third Committee, responsible for drafting the Universal Declaration of Human Rights, she also worked on the Fifth Committee, which dealt with genocide. Although constantly frustrated by her inability to achieve her aims, and feeling burdened by the weight of representing women during the transition from a traditional to a modern society, she remained committed to her attempts to create positive changes for women and minorities.

Shaista accompanied her husband who became the High Commissioner for Pakistan, living in Canada, France and the UK. By the time she returned to Pakistan, Ayub Khan had seized power in a coup from a government that many regarded as corrupt. Under his government, Shaista played a role in drafting the ‘Muslim Family Laws Ordinance’ of 1961 which deployed Islamic arguments to counter sexist customary practices. However, the couple swiftly became disenchanted with Khan’s government and moved back to London. Her husband developed a heart condition and died in 1963. Shaista requested a position as ambassador to Morocco, where she developed a growing interest in the Arab world, gradually withdrawing from Pakistani politics entirely. Her writing includes two books – Letters to Neena and Behind the Veil – determined to present Pakistan, as well as in other writings in English and Urdu, in newspaper articles, and in her autobiography, From Purdah to Parliament.

Shaista Ikramullah’s life bridged the colonial and post-colonial eras. Her influence over the shaping of Pakistani and international politics lasted long after her death. In 2002, the President of Pakistan awarded her a posthumous Nishan-i-Imtiaz award for outstanding contributions towards world recognition for the country.