The sister with seven brothers

Folktales are often violent and filled with sexual content. The pastel Princesses of early Disney films represent an art-form sanitised for Victorian sensitivities rather than the earthy concerns of its original creators. Folklore often has female creators who use the form to explore the themes of their everyday lives  touched with fantasy and symbolism. The potential for subversive fantasy is shown in the traditional Kurdish folktale The Sister with Seven Brothers, deals with themes of honour, violence and the family. In this story, female characters are shown in possession of supernatural powers, wisdom, courage, and an extraordinary strength of character. 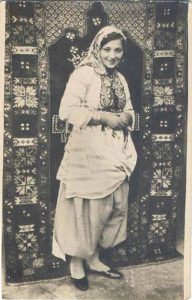 The story begins with group of girls were sitting together, making lace. The peace is disrupted when one of them farts loudly. Each girl swore on the lives of their brothers that it was not her: but the seventh girl had no brothers, so they blamed her. She went home, crying. Her mother comforted her, telling her that she had seven brothers, but they lived far away. ‘I’ll make you a donkey out of dust, so you can travel to see them,’ she said. And so, the girl travelled until she found a house set up for seven men. She cleaned, dusted and cooked, then hid herself when they returned from hunting. The men wondered whether it was a jinn who had done all their housekeeping, and set one of them, who had seven eyes, to find out who had done the work. Through keeping two of his eyes open, he saw the girl as she was cleaning at night. And so, she was united with her brothers. They were happy to see her, but warned her to keep away from the Ogress who lived in a castle nearby.

One day, the cat pissed on the fire and put it out. The girl had no choice but to go to the Ogress’s castle for some embers to start the fire again. The Ogress was out, but her seven daughters gave her the embers. As she left, a thread from the girl’s dress became tangled on a bush, and unravelled behind her. The Ogress smelled the presence of a human and followed the thread back to the girl’s home. ‘Open the gate!’ she hollered. The girl refused. Then the Ogress pleaded with her: ‘I am weak, and dying of hunger. Stick your finger through the keyhole and let me suck your blood.’ Again, the girl refused. But then the Ogress threatened to kill all her brothers, and so the girl agreed. The Ogress sucked blood from her finger, until she fell into a dead faint. Every day, the Ogress returned to suck more blood. One day the brothers returned to find their sister unconscious and one of them remained to witness the event. The brothers slew the Ogress and then married her daughters. They warned their sister to be wary of their wives.

The Ogress’s daughters proved to be demanding, and made the girl work very hard. One day, when she was very thirsty, they gave her water which contained one of their mother’s hairs. The tainted water made her belly swell.

The Ogress’s daughters demanded that the girl be killed. They delegated the youngest to kill her, but he did not have the heart to do it, so he just abandoned her in the forest. When she realised she had been left alone, she cursed her brother, and a snake’s spine embedded itself in his heel. She found her way to a village. The villagers thought she was pregnant; but she said that she had snakes in her belly. She inhaled the fumes of some pickles, and the snakes were expelled form her body. She married and lived happily in the village. One day, she saw her brother, limping towards her. She pierced his wound and extracted the snake’s backbone, and took him to her house to heal. As he recovered, she told him the full story of her adventures, and they forgave each other. The family were reconciled, and she was united with her brothers and her mother.