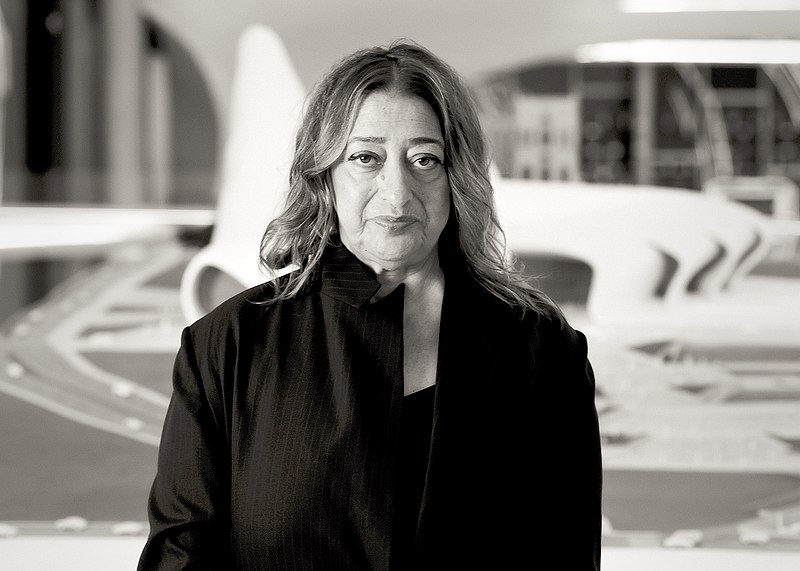 Zaha Hadid was an Iraqi-born British architect known for her deconstructive, avant-garde approach to design. Born into a cosmopolitan milieu in Baghdad, Zaha was intrigued by architecture from an early age. Her father was an industrialist and politician in post-Mandate Iraq; her mother was an artist. She was educated in boarding schools in England and Switzerland before beginning her tertiary studies in the American University of Beirut, where she took a degree in Mathematics.

In 1972, she studied architecture at the Architectural Association in London. In this period, the Association was a major centre of progressive design. Tiring of conventional designs towards the fourth year of her studies, Zaha began to develop her personal style, making a tremendous impact upon her professors for her vision, drive and independence of thought.

At the Association she met Elia Zenghelis and Rem Koolhaas, with whom she would collaborate at the Office for Metropolitan Architecture, in Rotterdam. She also taught students by day whilst working on her designs at night. She founded her own firm – Zaha Hadid Architects (ZHA) – in 1979. In 1982 she won the British Architectural Design Gold Medal for the renovation of a townhouse in Eaton Place, London. In the same year, she won an international competition to design a leisure club in Hong Kong in 1982.

Her design was never executed, however. Over the 80s and early 1990s, Zaha’s audacious, geometrical designs, inspired by Russian Constructivist and Supremacist art failed to make their way into production. This included plans for an opera house in Cardiff Bay and an art and media centre in Dusseldorf. With her designs being more likely to be exhibited in museums than built, she began to gain a reputation as a ‘paper architect’; her career stalled.

She did not complete an architectural project until she was 44 years of age. Towards the end of the 1990s several of Zaha’s designs were completed: a fire station and housing project in Germany, and an exhibition space at the Millennium Dome in the UK. Further projects followed.  She worked on the Lois & Richard Rosenthal Center for Contemporary Art which opened in 2003. It was the first American museum which was designed by a woman. Her designs became more ambitious as her career developed. She was quick to adapt to new materials and technology. However, her own designs originated as sketches, not on a computer. These sketches have been exhibited at the Guggenheim Museum in New York and the GA Gallery in Tokyo amongst other locations.

As part of a ground-breaking career, Zaha Hadid was the first woman to be awarded the Pritzker Architecture Prize in 2004, the most prestigious award in architecture. In 2010, she built the MAXXI museum of art and architecture in Rome, earning the RIBA Stirling prize for best British architect. She was the first female architect to achieve this honour. She would win the same award the following year, for the design of a school in London. Other notable works include the London Aquatics Centre, the Eli and Edythe Broad Art Museum and the Jockey Club Innovation Tower (2014) for the Hong Kong Polytechnic University. In recognition of her accomplishments she was made a Dame Commander of the Order of the British Empire in 2012.

Hadid taught architecture at the Architectural Association, Harvard University, the University of Chicago, and Yale University and other establishments, as well as designing furniture and theatre sets, creating fashion and calligraphy, as well collaborating with brands such as Adidas, and even on a musical production with the Pet Shop Boys.

As fellow architect Yasmin Shariff noted, Zaha worked in a ‘misogynistic, racist and anti-architect environment’. Zaha was frank about the challenges of working in a male-dominated environment, saying ‘Architecture is particularly difficult for women; there’s no reason for it to be. I don’t want to blame men or society, but I think it was for a long time, the clients were men, the building industry is all male.’

Zaha became bemired in controversy when it was reported that a thousand immigrant workers had died in Qatar, where she had been involved in preparing a stadium scheduled for the 2022 World Cup. The media quoted her as giving a dismissive response to this atrocity. Stung, she launched a defamation suit against the New York Review of Books. The author of the offending article issued an apology.

In 2016, whilst being treated for bronchitis in Miami, she died of a sudden heart attack. She left 36 productions unfinished, to be completed by her 350 staff and partners at ZHA, which continues to build upon her legacy of gravity-defying, futuristic building. These works had, at one point, established her as the highest paid architect in the world. In memorial, her friend Shumon Basar described her as ‘brusque and honest’; fearless and flamboyant, dressed by Miyake and Yamamoto, Zaha was a characterised by her aggressive talent as well as the unsparing dedication to the work which forms her legacy. As Michael Kimmelman of The New York Times wrote, ‘her soaring structures left a mark on skylines and imaginations and in the process re-shaped architecture for the modern age’.