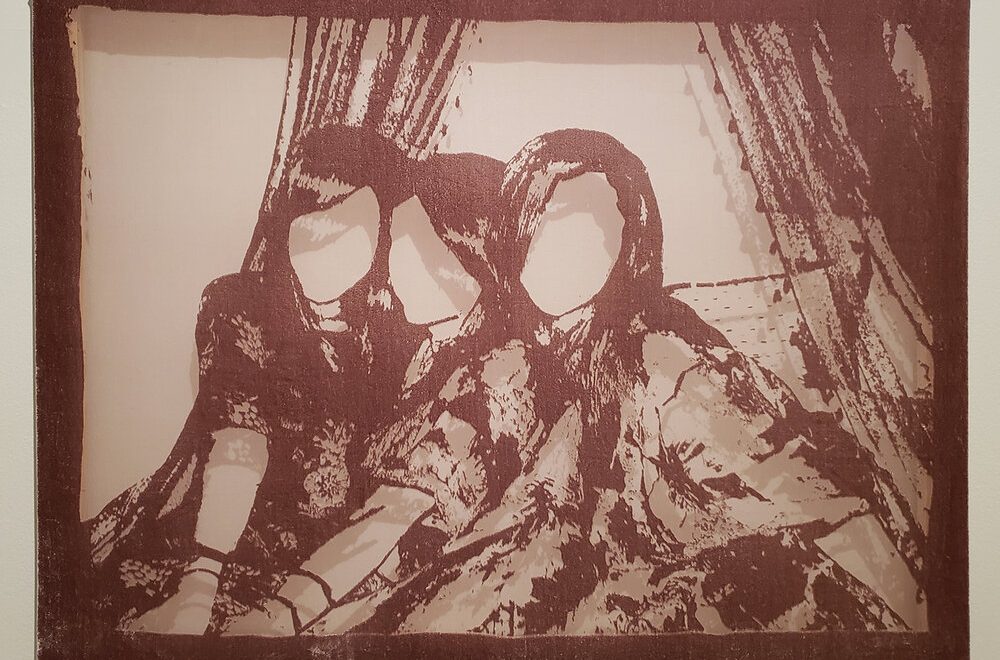 Soft powers is an exhibit that builds upon work and themes that I’ve been exploring for the past four years. These include coming of age, nostalgia, and the tensions of growing into adulthood within a diasporic community – relayed specifically through the lens of Yemeni-American girls and women. There are two main parts: a series of fibre etchings and an immersive installation.

The fibre etchings feature images based on personal photos: my own and others I collected from Yemeni-American friends and family. They’re photos we took of each other when we were teenagers, during casual moments and in our own spaces. Growing up, we often experienced feeling hyper-surveilled. This I think often stems from a communal obligation to ‘protect’ young girls who are becoming women. Within diasporic communities the impulse can be even stronger.  But for us, as teenagers, there was a fine line between protection and control. In this work, I chose to focus on these moments when we were amongst each other, not having to worry about who might be watching us.

Soft powers refers to what I consider a kind of superpower. To put it simply, it’s like code-switching – but it’s much more than that. Going back and forth between a collectivist culture at home to an outside world that encourages individualism, and then adding layers of very different gender expectations – it’s a lot for a teenager. So we find ourselves adapting nuanced and sometimes covert skills to help us navigate the different worlds we inhabit.

At the end of the gallery behind a partition wall, there is an installation of a bedroom. It’s the third iteration of this space and this time it belongs to a fictional pair of sisters, Dina and Saba. I collaborated with author Randa Jarrar who wrote the text for the girls’ diaries. Along with the objects in the room, they tell a story of their lives as teenagers in the 90s – from seemingly trivial teenage obsessions to the more complicated issues they’re dealing with. Seventeen year old Dina, for example, writes about her crush on actress and dancer Rosie Perez while venting her frustrations about the pressure to marry from her parents.

Being Arab and of Muslim heritage, it can be a challenge to find ways to talk about issues like misogyny and struggling with religion. Even though these things are experienced by people of many cultures, there is a higher risk of perpetuating xenophobia given the current climate. Working with fictional but very real and multi-dimensional characters made it a bit easier.

I love using installation as a vehicle for nostalgia and storytelling. It can be a very effective way to give a perspective into another person’s world. When you walk into the room, even knowing it is a fictional bedroom, there is a feeling of intimacy that can build empathy and understanding for someone who’s life may be very different from your own.