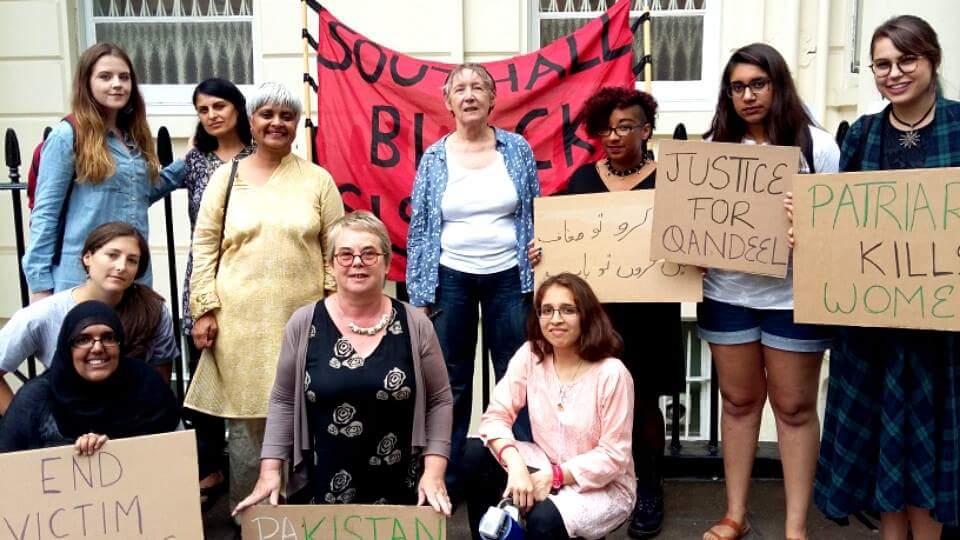 Until two weeks ago, mentions of Qandeel Baloch on my social media were accompanied by memes and jokes. Posts ridiculing her accent, laughing at her, judging her – but through it all, consuming her.

I am not sure why I was so shocked. Women are constantly killed in the world we live in, especially women like Qandeel. Women who dare to speak out, who dare to defy expectations: women who stand out from the crowd. Women who have opinions. Women who take ownership of their bodies and their sexualities. Women who challenge the hypocrisy of a society in which there are no consequences for men but all of them for women.

Maybe the shock came from how quickly she transformed from being the target of jokes and laughter to being the victim of violence. Qandeel was all of the above and through that, she was a threat to the power structures that hold up our society – the structures of patriarchy, of class, of ethnicity. She saw this patriarchal society, which requires women to constantly meet men’s needs, for what it is and decided that she would do it her way. She took control and in doing so, she exposed the double standards that are entrenched in Pakistan, but also more generally all over the world. She brought out in the open the issues that Pakistan prefers to keep behind closed doors.

There has been a lot said and written since her death last week. Outpourings of anger and grief from Pakistani feminists who have had enough of this. Enough of burying our sisters, of fighting a culture that is perpetually trying to silence us, enough of the voices that continue to defend crimes against women in the name of honour, or religion, or culture, or respectability… the list of excuses that are used for killing women is endless. I will not try to say things that have already been said more effectively than I could ever do. Instead I will ask you to read this powerful piece by Iman Shaikh on how the responsibility of Qandeel’s death lies with all of us and with the culture of silencing women in South Asia. Or read this articulate and rage filled statement written by Action for a Progressive Pakistan and signed by Pakistani activists, calling for accountability and justice for Qandeel.

What I will say, and what seems to mostly be invisible from the analysis, is the role that class played in how Pakistan reacted to Qandeel, and how it continues to do after her death. Qandeel was killed by a unique combination of misogyny and classism. She was a working class woman, the sole breadwinner for her family. Her videos were shot on her mobile phone camera. She did not have the luxury of stylists and a support staff. She was completely self-made. She did not have private security, she did not live in the bubble that is inhabited by the rest of Pakistan’s showbiz industry. Her vulnerability, as an outspoken, bold woman, was multiplied by her place is Pakistan’s intensely divided class structures – she was visible and accessible.

The treatment she received in her life from the media and from Pakistan’s ‘liberal, educated’ elite is an example of this. She was made a joke of because her English was accented, because she lacked the sophistication we expect from ‘respectable’ women. She is not the only star in Pakistan who wears so-called revealing clothes, or participates in suggestive music videos. That is not to say those women aren’t judged – they are. Misogyny affects all women. But it affects us in different ways. For Qandeel, it translated into ridicule at first, and then threats, not just because she was a strong, bold woman but also because she was a strong, bold, working woman who dared to be ambitious, who wanted to cross the boundaries of class.

Would Qandeel’s pleas for protection have been ignored in the same way if she belonged to the upper class, if she was a television star instead of a social media one? Would she have received the same level of venomous self-righteous anger and judgement before and after her death?

For this reason and all of the above, I will be outside the Pakistani Embassy in London on Friday 22nd July at 4pm. I will be there because when I shared an article condemning Qandeel’s death on my Facebook, I received comments saying she asked for it, that she was no role model, that she was a disgrace to the Baloch name and to Muslim and Pakistani women worldwide. I will be there because Qandeel Baloch was everything women across the country are scared of being. Because whether Pakistan likes it or not, she was and is ‘Our Qandeel’.

Zaimal is a London based activist and organizer currently writing her dissertation on street harassment in-between looking up pictures of cats and Fawad Khan. Originally from Karachi, she is a Feminist and Muslim (but not a Muslim Feminist), and is obsessed with libraries.