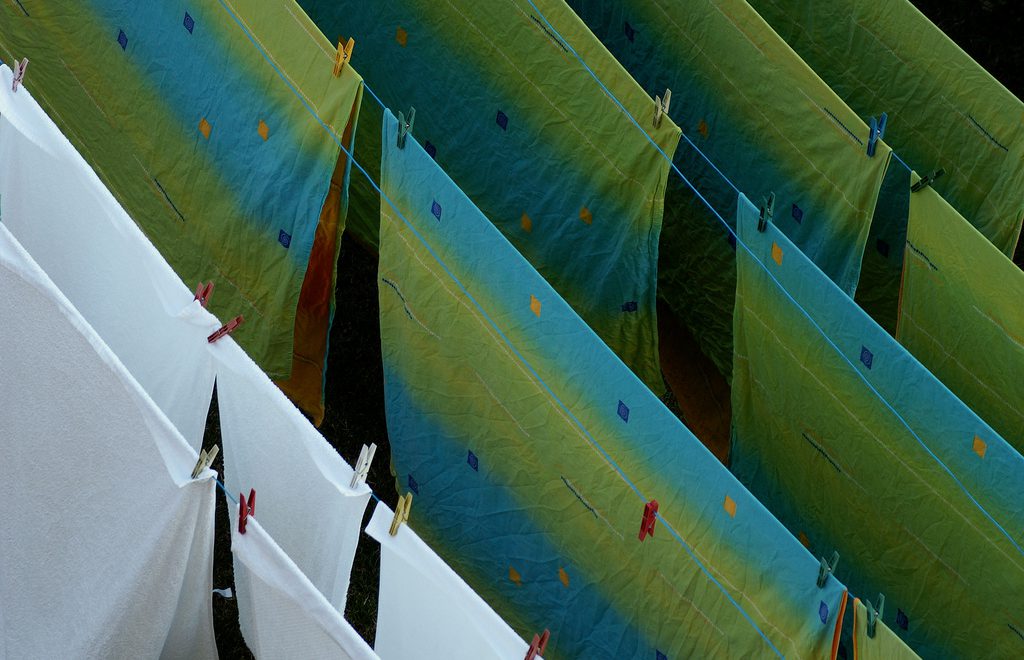 Last week a good friend of mine shared a tweet to our private Facebook group. The tweet, ‘How to find out if she’s a virgin’ was posted by a ‘sheikh’ in support of his ‘Game of Marriage’ course, a free online resource helping couples towards a successful marriage. The course promised to answer even more pertinent questions such as ‘Is sex on the first night necessary?’ At first glance, this seemed like a parody account posting deliberately antagonistic material in order to incite a reaction. But alas, no. The so-called sheikh actually has a significant social media following; over 200,000 likes on Facebook, more than 20,000 followers on Twitter, and millions of views on YouTube. In this day and age, in which women are sole breadwinners, ensuring their family’s financial well-being while trying to smash glass ceilings and even glass walls. Female athletes represent their countries on the world’s stage, and there are businesswomen capable of turning over billions in profit every year, and even CEO’s and directors of Fortune 500 companies (though we still have a long way to go on this front). We even had a movie playing in the theatres not long ago recognising the contribution made to America’s Space Race by three awe-inspiring women, whose individual stories had been whitewashed from history until now. 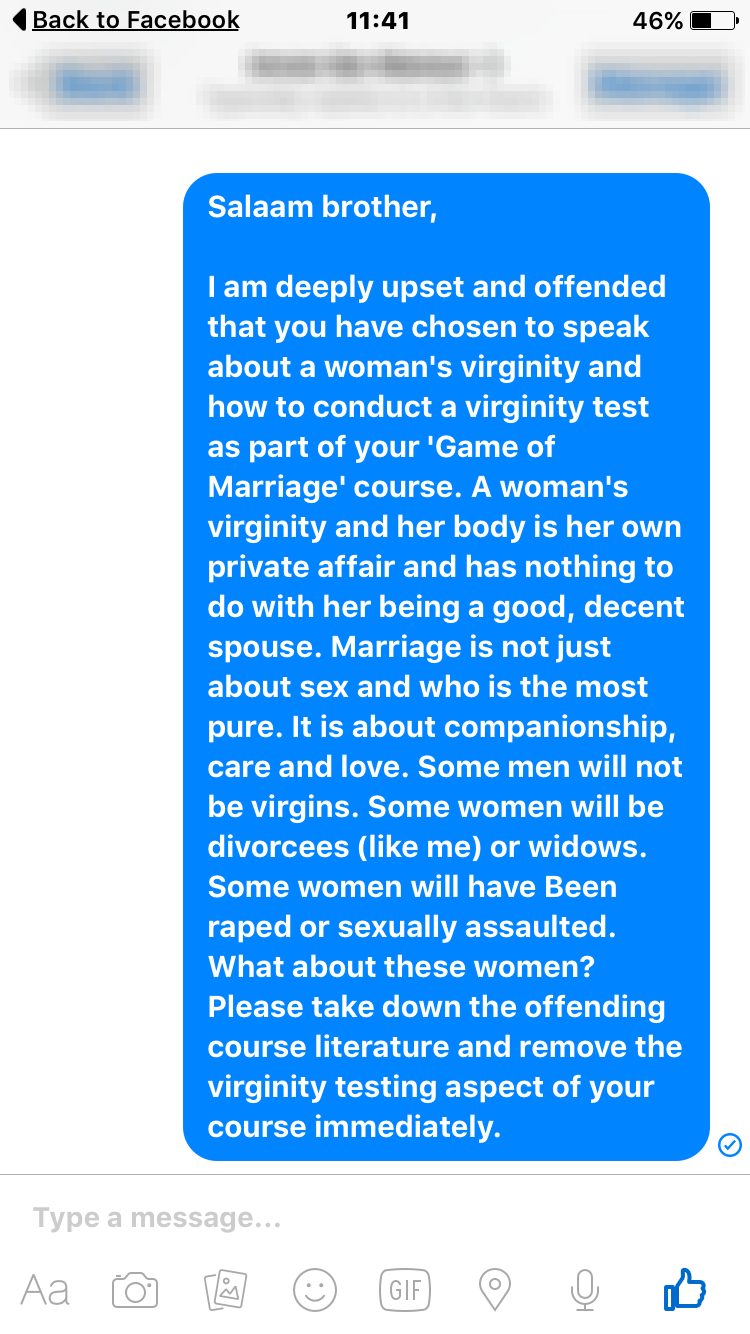 But somehow, all this pales into insignificance when it comes to the state of our hymens, or lack thereof. I felt compelled to send the aforementioned ‘Sheikh’ a direct message, asking him to ‘take down the offending course literature and remove the virginity testing aspect of your course immediately’. His response was: ‘Walaikum as salam wa rahmatullahi wa barakatahu sister, I think the video clip was heavily misunderstood. It was a clip taken from an entire lesson that talks about the benefits of marrying a virgin and a non-virgin (divorce/widow) in a lot of detail, and then I went through the reasons why a non-virgin is at times preferred and better to marry over a virgin The reality is that our Prophet ﷺ discussed all these issues and there is guidance in knowing it. I hope that helps explain where I was coming from’.  So, basically, according to the response above, women fall into two camps; you’re either a virgin, or you’re not. There is no mention about personality, about piety, about qualities that a woman may possess as a wife or a life partner. 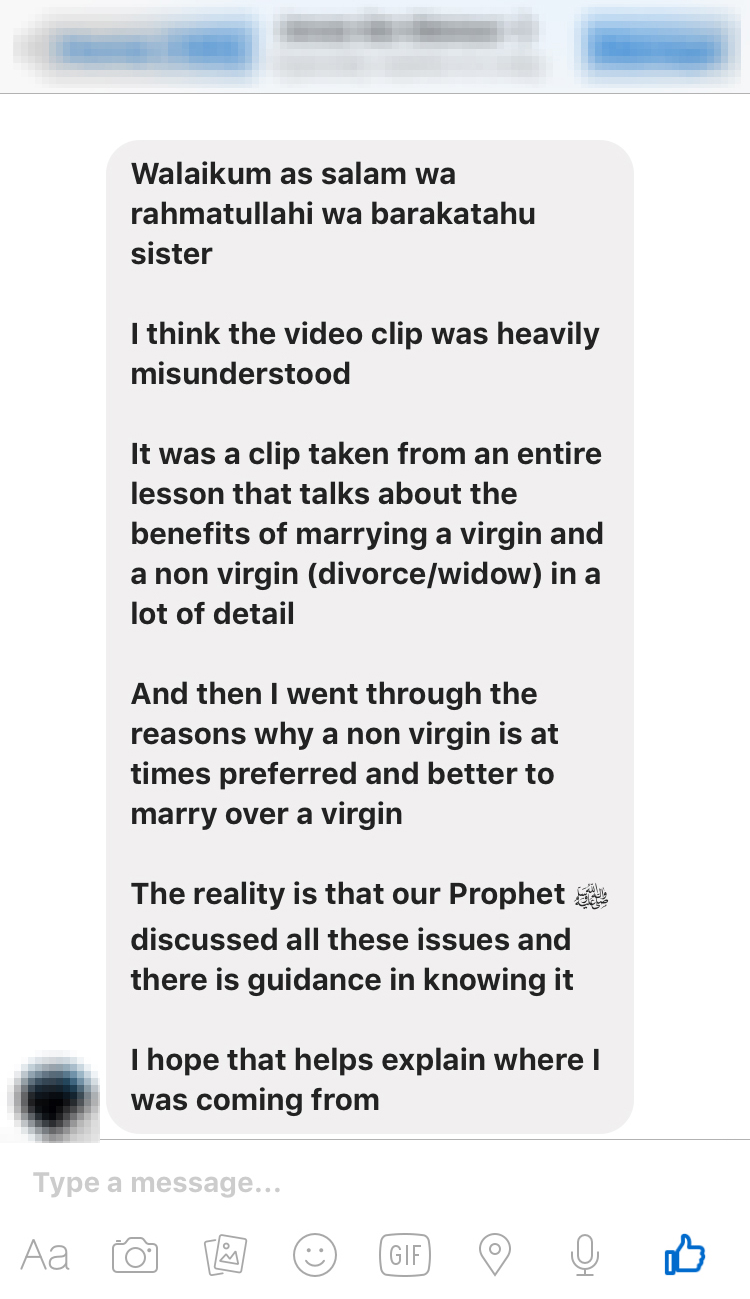 This kind of talk is deeply dangerous, as it’s one of the reasons we have such atrocities as ‘honour’ killings and ‘honour’-based violence in our communities. If you struggle to understand then consider this: a woman’s state of purity is a direct reflection on the standing her father, brothers and uncles (in fact any male member of her family) hold in their community. If she has had a sexual encounter (or has even been raped) then she is no longer considered ‘pure’ and untouched. To have that as a label, even if it is only a rumour, is considered a fate worse than death. For the men of these women, it is even worse. BBC presenter Anita Rani touched upon this when she filmed an episode for the ‘Who Do You Think You Are’ TV series. She discovered that her grandfather’s first wife had most likely killed herself to avoid the shame and dishonour of being raped during the traumatic Partition of India and Pakistan. Many thousands of women would have suffered a similar fate, regardless of their faith, and all in the name of their father and grandfather’s honour.  Murders and killings linked to honour are not just confined to India either. In a Pakistani movie I watched many years ago, one of the protagonists jumps to her death to avoid being gang raped, with the dying words ‘at least I have saved my father’s honour’. One of the most popular TV dramas at the time, Marvi, had a story line in which the heroine is sent to the big city to study. During a scene in which her father tries to justify her studying away from home, he responds ‘I know my Marvi, she would never try to dishonour her father’s honour in any way’.

These subliminal messages were quite a shock for me. As a 13 year old brought up in the United Kingdom, I had never really experienced anything as subversive and insidious as the need to uphold my father’s honour except through viewing of movies and television dramas in Pakistan. I can see how this ‘drip drip’ effect can be very powerful. It also goes to some length in explaining one of the reasons why some families will never report sexual abuse or rape; they don’t want to advertise to the world that their daughter nor sister is no longer ‘pure’ and that all attempts to protect and uphold the family honour have also failed. Getting back to the matter in hand – what can be done about men who promote virginity testing?

A few months ago, there was an international outcry after an Egyptian MP, Elham Agina, suggested virginity testing for university students. I wrote an open letter, titled ‘Hands off our hymens’ to him to express my disgust and anger. In face of such hostility, the Minister backtracked and then tried to say it was only a ‘suggestion’. But where is the condemnation this time? Why was it just a group of British Muslim women who felt this outrage? I know of some who would argue that the ‘sheikh’ in question is merely pandering to the demands of their followers rather than trying to perpetuate this type of misogynistic, medieval attitude towards women themselves. But as a ‘leader’ with so many followers, does he not have a duty towards all women; especially those that his male followers are hoping to marry? Where exactly are the rest of our so-called religious and community leaders anyway? Who is there to challenge and hold accountable those who hold such degrading and damaging views of women?

Perhaps the notion of a perfect man who defends others selflessly, and can handle a woman lacking an intact hymen is nothing more than a wish-fulfilling fantasy. Surely, Muslim women can be, and should be portrayed in more meaningful language than merely as either virgins or non-virgins? Or will it take a ‘real’ man, to recognise this fact? Sadly, in light of whom we have as leaders today, I’m afraid that we women have no one to rely upon but ourselves to try to change the narrative to one in which women are worth much, much more than simply the state of our hymens.