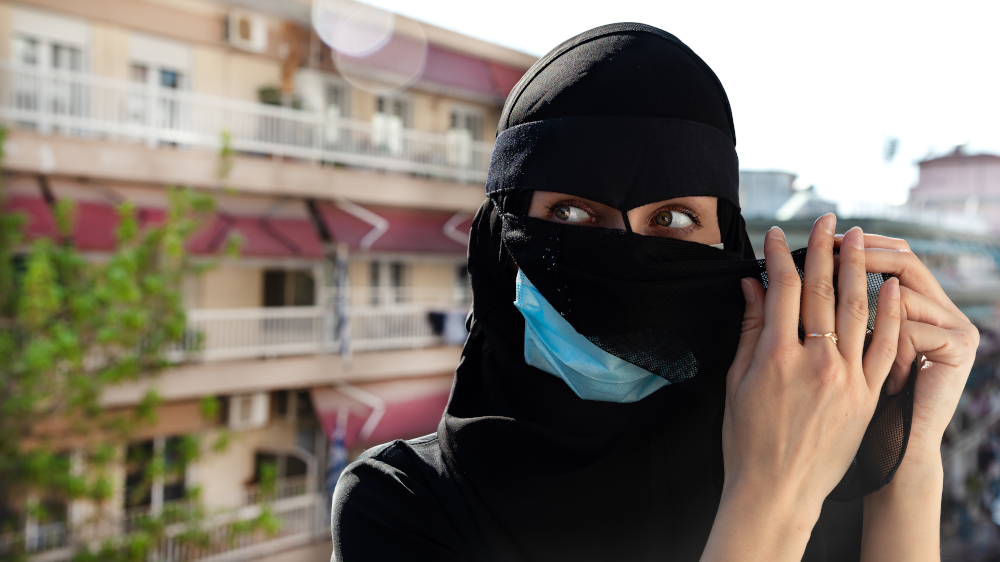 Some people, including Human Rights Watch’s Director Ken Roth and politicians like Rabina Khan have taken the opportunity of a global pandemic to defend the burqa/niqab by comparing it with mandatory face mask rulings used in the fight against Covid-19.

Immediately after Ken Roth’s tweet implicitly supporting the ‘right to veil’ of women (only), women who had fought the imposition of the compulsory burqa in their own countries issued a strong protest. They pointed to the fact that Ken Roth accused France – and only France – of ‘Islamophobia’ for banning burqas, while he was too cowardly to dare to point out the Muslim-majority countries that have done the same thing, such as Cameroon, Chad, Egypt and Bangladesh amongst others. Ken Roth knowingly  – he has duly been informed over the years but to no avail – omits that France has banned any form of face covering (burqa included) in the public space, when it is not appropriate, such as helmets when one is not driving a motorbike or masks outside the time of carnival, but certainly authorises them when it is. What could be more appropriate than surgical masks preventing contagion in times of a pandemic?

Also, face masks are temporary measures for both women and men to safeguard public health in the public space during a pandemic that has already killed nearly half a million people across the world. The niqab and burqa, on the other hand, are far from safeguarding women. They are impositions by Islamic fundamentalists to control and erase women from the public space. They are extensions of victim blaming and modesty and rape culture. If women don’t cover up as fundamentalists and patriarchs demand, they are to blame for any rape, violence, honour-related crimes and threats that they face. If sweets are uncovered, as so many banners in countries like Iran and Afghanistan argue, flies will naturally swarm towards them.

Lumping together ungendered health protection necessitated in times of a pandemic and religiously manipulated dress codes ‘offers a victimization that Islamist fundamentalists and preachers of Salafist Islam never stop seeking,’ says a statement by women activists which pays homage to the women executed by fundamentalist states and non-state actors for not submitting to compulsory veiling. It unequivocally rejects the imposition of a religious identity by a minority.

Roth’s attitude is nothing new. International human rights organisations have persistently ignored – or worse opposed – women fighting for their right not to be forcibly veiled, as was well-documented in Algeria under the fundamentalist boot in the 1990s. These organisations have persistently supported the rights of religious males fighting for domination over women – including the imposition of various forms of veiling amongst other forms of oppression.

What has been ignored is that most Muslim women don’t wear the niqab or burqa. These are Islamist uniforms which become predominant when the fundamentalists have power. Not only have human rights organisations actively participated in reinforcing patriarchy in our countries, they have also participated in the eradication of cultural diversity. A few decades ago, Muslim women were wearing saris in South Asia or boubous in the Sahel, colourful dresses in the mountains of Algeria, etc… The worldwide promotion of the burqa, a specific Mid-Eastern outfit from a narrow geographic area by Muslim fundamentalists and their human rights supporters, blurs one of the great cultural assassinations of our times, failing to address this cultural form of imperialism.

Even in the case of the hijab and headscarf, it is important to add that socially speaking and on a mass scale, these are impositions on women who face shaming and punishment for non-compliance by their families, ‘communities’ and Islamic states. Veiling is highly contested by Muslim women or women presumed to be Muslim. In Iran, for example, women protesting compulsory veiling laws are imprisoned for decades. What is often touted as a women’s choice is more often than not acquiescence and submission at best – and a long term in prison, or honour-related violence and even death at worst.

Finally, we have a message for women of Muslim descent who confuse a health prescription for men just as much as women with an extremely reactionary form of religiosity which specifically targets women. Yes, there is discrimination against minorities and migrants – but discrimination must be fought economically, socially and politically, with political tools – not religious ones. Moreover, on the issue of the burqa and niqab: be wary of betraying your sisters who fight against forced veiling throughout Asia, Africa and the Middle East – and now in the diaspora. Do not ally with organisations who feign to fight for human rights to the detriment of women’s rights. Do not ally, wittingly or unwittingly, with fundamentalists, even when they disguise themselves as anti-racists and human rights defenders.

Marieme Helie Lucas is an Algerian Sociologist and Founder of Secularism is a Women’s Issue.
Maryam Namazie is an Iranian-born activist and Spokesperson of the Council of Ex-Muslims of Britain and One Law for All.