Married at 13 years of age

In a rural part of Haryana, India, three newly-wedded sisters are home together for the first time since they got married. ‘We have come back to our village to visit our parents,’ explains Meenu, 20, the eldest. Her sisters, Saakshi and Kaushal, are seated next to her on Skype: ‘Life after marriage is different; you have to mould yourself in order to fit into the new family,’ says the middle sister Saakshi, 18. 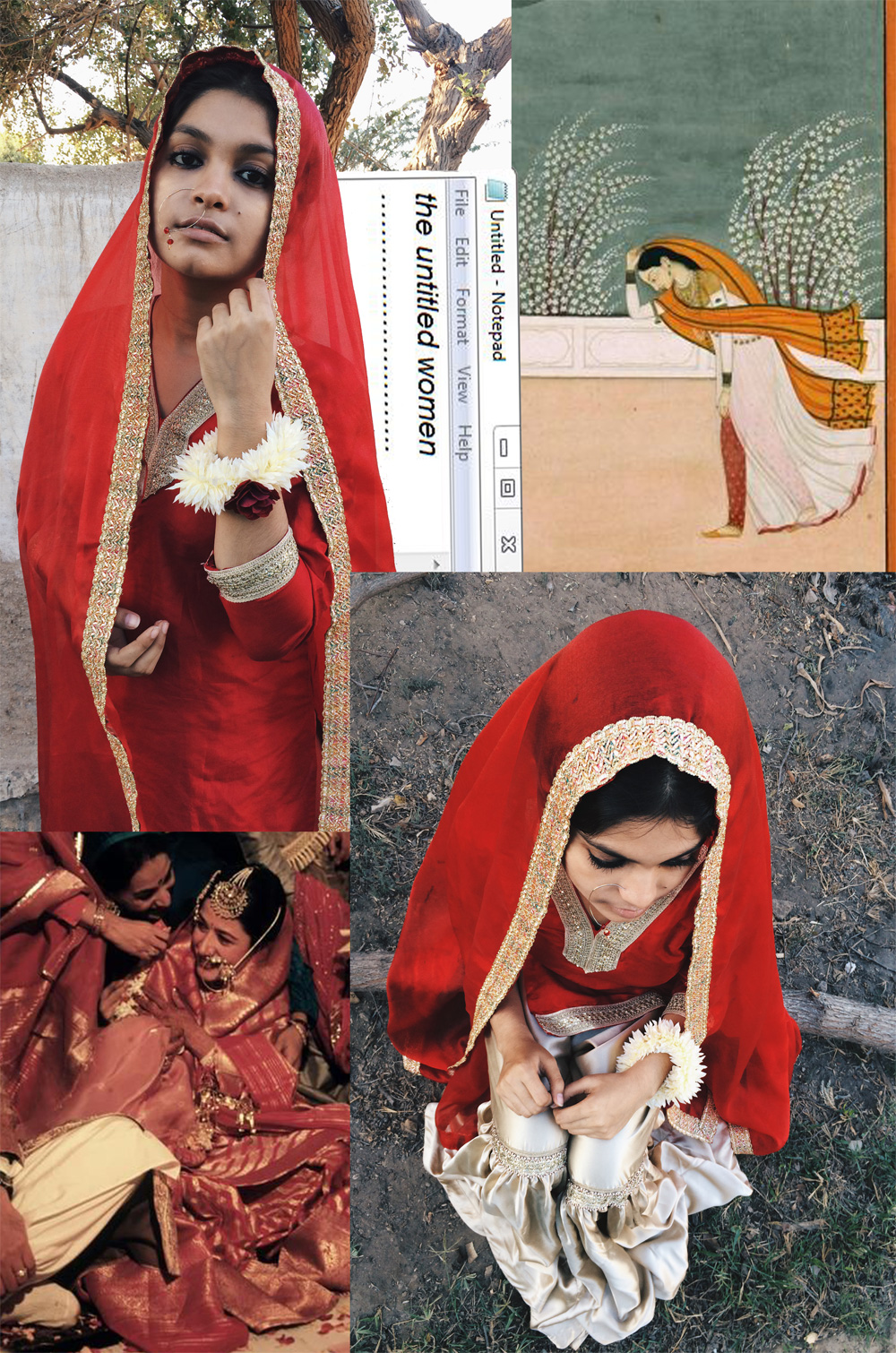 Kaushal is mostly quiet. She is the youngest. Last time I saw her on my visit to India two years ago, she was wearing her school uniform, playing a chasing game with her friends after school. But now, she looks more serious and put-together, wearing traditional attire – a rust coloured shalwar kameez – with a scarf around her neck, her hair tied back into a ponytail. The change in her carefree attitude is no surprise. Whilst most girls her age are in their early years of secondary education, Kaushal has now taken on the responsibilities that come with being a wife. She is only 13.

Child marriages are illegal in many countries in Asia, including India. They take place nonetheless. In India, which has the highest number of child brides in the world, 47% of girls are married before they turn 18. Although there has been a decline in child marriage for females in recent years, it still continues to affect nearly a third of all girls in the country.

Whilst the concept of such a marriage is considered barbaric, backward and the result of poor education by people in the West, often practicality and compromise surround the reasons behind such decisions made by the parents of child brides.

I first met Meenu and Saakshi in 2014 through an NGO that promotes education in rural villages in Haryana. When I was first informed of their wedding which took place last March, I was happy for the two sisters who would be entering a new stage of their lives. It was only when I received a picture from their wedding day that I realised that, unbeknownst to me, their youngest sister had also been married off on the same day. In the photo, all three sisters were dressed in red, with matching dupattas draped around their heads, adorned with jewels like a tikka, nathni, earrings, and bangles. But whilst Meenu and Saakshi seemed joyful, Kaushal had a look of despondence that was frightening.

A daughter’s wedding – a father’s duty
As someone with Pakistani roots, I know all too well how getting daughters married respectfully is considered a father’s duty in the South Asian culture. It is also a big responsibility; one that society emphasises. A daughter’s wedding comes with societal expectations, which a father must fulfil, and these expectations come with a price. ‘Saakshi and I were at the age of marriage, so when my father decided to get us married, he thought it was best that Kaushal was married at the same time. This way, he wouldn’t have to bear the cost of arranging a second wedding in a few years’ time,’ explains Meenu.

Traditionally, the girl’s family arranges and pays for the wedding day, which is attended by the groom’s family, who are guests that have come to ‘collect’ the bride and take her to her new home. ‘It has become somewhat a trend for families to put on a show during a wedding. They want to show that they have done a lot for their daughters, by buying them fancy clothes, gifting them furniture, and feeding all the guests a delicious feast. Here, in these rural communities, this is how a father is judged on whether or not he has done his duties well,’ explains Mr Sharma, a project coordinator of the NGO I worked with in India.

Meenu gives weight to this claim, explaining that, even after trying to keep the event simple, it was difficult to cut back on the expenses. ‘Our father is the only breadwinner in the family, so he had a lot of financial pressure during the preparations for the wedding. If he did not make adequate arrangements, the community would make comments and look down on him.’

The fact that a girl’s family has to arrange and fund her wedding is a reason why daughters are often considered a burden in rural communities. While a son can get educated, find a job and support the family financially, a daughter is not always able to enjoy the same opportunities or freedom.

High schools are often located far away from villages, so some parents do not want to send their young daughters to school after a certain age, as there is a threat they could be sexually harassed or raped en-route to school. ‘Parents are obligated to protect their unmarried daughter’s honour, and as a girl matures, this duty to protect becomes increasingly stressful as there are fears of sexual assault. So some choose to marry off their daughters young, so that her husband can take care of her and protect her,’ explains Mr Sharma.

Protecting a daughter’s ‘honour’
This concept of protecting a daughter’s ‘honour’ is one that previous generations of my family have also used to justify child marriage, back when present Pakistan was still a part of India. My maternal grandmother, who was married aged 17, had relatives who were married even younger. ‘In those days, a father was not able to leave his young, unmarried daughters at home and go to another city for work, or to travel to perform Hajj. So they married off their daughters young in order to have a peace of mind,’ she says.

Like Kaushal, my grandmother’s aunt was married aged 13. ‘When she arrived at her husband’s village and got off her dholi, she started to play with her brother,’ she recalls, illustrating the girl’s confusion.

The practice was abandoned by my grandmother’s family decades ago, as parents realised the importance of educating their daughters. Luckily, there are also signs of progress in the village which Meenu, Saakshi and Kaushal belong to. The older two sisters were married after they turned 18, and have continued their education after marriage. As well as attending school, Meenu has enrolled in a computer class, and Saakshi sews clothes at home.

Child marriage tends to be enmeshed within a number of complex issues that are unique to each community and region, but the recurring themes are poverty, isolation, weak rule of law, lack of opportunities or education for women, and fragile social and political contexts, such as the aftermath of conflict or natural disasters.

But Kaushal’s case is different and somewhat contradictory – she has become someone’s wife at the tender age of 13, but at the same time, unlike other child brides, she has been given the chance to live out her youth. Whilst Meenu and Saakshi have moved in with their in-laws, Kaushal will continue to live at her father’s house until she has completed her education. ‘Our father made it clear before giving her hand in marriage, that Kaushal would continue her education and would only move in with her husband upon completion of her studies,’ says Saakshi, who has been married into the same family as Kaushal.

‘My in-laws are very excited at the prospect of educating Kaushal and I. In April, I studied for and gave my Class 12 exams from my in-law’s home. It is important for parents to communicate their wishes of educating their daughters to the suitors,’ she continues. The parents of the three sisters negotiated their daughters’ education before agreeing to the three proposals. For them, it was important that the girls would be allowed to continue their education and work even after marriage.

Kaushal is able to attend school regularly from her parents’ home. Her situation is not ideal for a 13-year-old girl, but not having to live with her husband, who is five years her senior, means that she has more time to focus on her studies and work on her self-development. Whilst her situation is better than that of thousands of other child brides, it is still a situation that Kaushal should not be in. Meenu and Saakshi mention how, in an ideal world, it would have been nice to choose someone for themselves, to get to know them and then decide whether or not they wanted to get married. Kaushal doesn’t say anything, but nods in agreement.

‘Parents only want what’s best for us. Of course, child marriage is wrong, but the community does not understand this. There are girls in our community a lot younger than Kaushal who recently got married. One of them was nine, another ten, and another 11 or 12,’ says Meenu.

‘A lot of work needs to be done to make parents understand that they need to trust their daughters. Girls are able to go to school or to work without being harassed, there are ways around these problems, but marrying them off young is not the solution,’ says Mr Sharma.

Even when my grandmother, now 83, reflects on the child marriages that took place in her generation, she is adamant that it’s a practice that should stay in the past. ‘Back then maybe it was acceptable and mostly for religious reasons, but now there are so many opportunities for girls. They should be encouraged to study and establish a career before they consider marriage.’

Despite being a child bride, Kaushal has access to opportunities and, hopefully, a bright future ahead of her. Yet, one cannot help but notice the change in her vibrant, bubbly nature – an indication that such practices, no matter how lenient, have heavy psychological costs for the young victims.

When I ask the sisters about their futures, all three have aspirations. Meenu wants to start a beauty salon in the community where she now lives with her in-laws, and in doing so, she hopes to provide employment opportunities for the local girls. Saakshi wants to teach after completing her studies. Kaushal – who has remained quiet throughout – seems moved when asked what she’d like to do in the future. ‘I want to study and become an engineer,’ she replies. For the first time during our conversation, I see a glimpse of the vibrant, carefree Kaushal I had met two years ago.

*The original article was edited and pseudonyms were introduced in order to protect the identities of the subjects.

Sara is a freelance journalist, currently studying for her Master's in Journalism, Media and Globalisation.