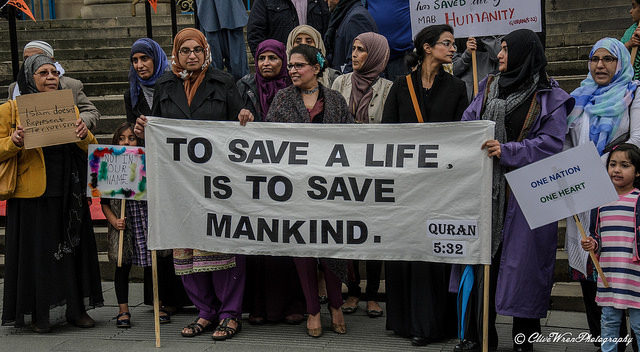 Since 9/11, the public image of Islam has been inextricably associated with extremism, and has formed the centre of hostile attitudes towards Muslims. Meanwhile, many Muslim women find themselves targets of vicious Islamophobia, as well as conflicts around the roles of women of Muslim heritage in an era in which traditions are being called into question. Here are half a dozen sister-hood posts in which women of Muslim heritage discuss the issues around radicalisation within the Islamic faith.

My London will survive

Sanam Naraghi-Anderlini reflects on an attack that struck at the heart of London, staking her faith in the ability of the multicultural city in which she grew up to resist attacks upon its unity and identity.

“Along with the pain and worry, there was a simmering sense of absolute outrage of the ‘how dare anyone try to mess with us?’ kind. Because once a Londoner, always a Londoner, and we Londoners take our city very personally. It is hard to describe what it’s like when your entire life and your past (memories of my father’s youth, my aunts’ stories and so on) is ever present in the geography of a place. It is personal when you feel like you know every paving stone, and every yard of the areas cordoned off. It is personal when you remember your first visit to Parliament Square in 1976, and the most recent, just a few weeks ago.”

Saying ‘Not All Muslims’ is not enough

Asmaa Mabrouk calls out a tendency for some Muslims to fail to acknowledge radicalisation, and calls for an honest reckoning which challenges complacency around extremism.

“Nowadays whenever the topic comes up, I say almost the same thing with a minor improvement: those people don’t represent most Muslims. This is far more accurate than what I used to say before. The reason I changed my mind is because I realized that some of the things that these terrorist do are inspired by the Quran or some aspect of Sharia law, such as the stoning of adulterers, the persecution of LGBTQ people, the hijab being a requirement for all women, waging holy war, beating wives ‘lightly’, regarding people of other religions as inferior, etc. They don’t represent most Muslims, because the majority of Muslims recognize that these antiquated and disgusting practices need to be left in the past where they belong. We cannot apply practices from a thousand years ago to our lives now.”

No country for dissenters

The majority of victims of Islamist terrorism live in the Muslim world, and are targets because they challenge the Islamist dogma, whether as members of minority faiths or through presenting atheist or secular challenges to radical Islam. H Jafri discusses the situation in Pakistan and the dangerous environment for free speech in that country.

“Liberal, secular and progressive Pakistanis have been openly condemning this toxic mix of religion and governance since its implementation in 1980s. We have been challenging anti-blasphemy laws for four decades without any substantial progress. Despite our efforts, our society has become less secular and more intolerant. It would be a mistake to view the recent large scale condemnations of Mashal’s lynching as progress. Neither Tahira Abdhullah’s murder, which occurred days after Mashal’s lynching, nor the incident in Chitral have been condemned with such ferocity. For Mashal Khan, the vast majority of Pakistanis, including our political leaders, waited until he was cleared by the police of his blasphemy charges before condemning his murder.”

In the aftermath of any terrorist attack, there are inevitably questions about motivation. Sarah Sabir explores the tendency to pathologise terrorist attacks as aspects of mental illness with a look at some of the evidence.

“The other finding of the report, however, is that there is no basis whatsoever for stating that terrorists who are part of groups have an increased occurrence of mental disorders. To be part of a group, an individual has to function at least at a minimum level of socialized behaviours, which rules out participation from individuals with the most severe mental health problems. This does not mean that becoming radicalised and participating in terrorism doesn’t lead to mental health problems in themselves. But if a person’s mental health isn’t necessarily the explanation, how then can we understand radicalisation? If internal factors can’t explain terrorism, are there external factors or circumstances that can?”

Roda Musa reminds us that Islamic terrorism is only one part of the picture, and that terrorism committed by non-Muslims often fails to garner the same level of condemnation.

“The following days after Finsbury, and after the Islamophobic acid attacks, there was a distinct and noticeable silence, compared to the constant stream of thought pieces we’d see when the attacker was a Muslim. Instead, there was an effort to shame the victims of the attack.

There was no one asking where these white men were radicalised, no one questioning if we were too tolerant of Islamophobia, even though this would mirror the Prime Minister’s sentiment following the London terror attacks, when she proclaimed that Britain was too tolerant of extremism. Of course Theresa May meant the extremism most closely associated with Muslims. Britain likes to cast a blind eye to the extremism of white men.”

I do not condemn ISIS

Jenan Alhamli comments on the pressure for everyday Muslims to repudiate ISIS and Islamic extremism.